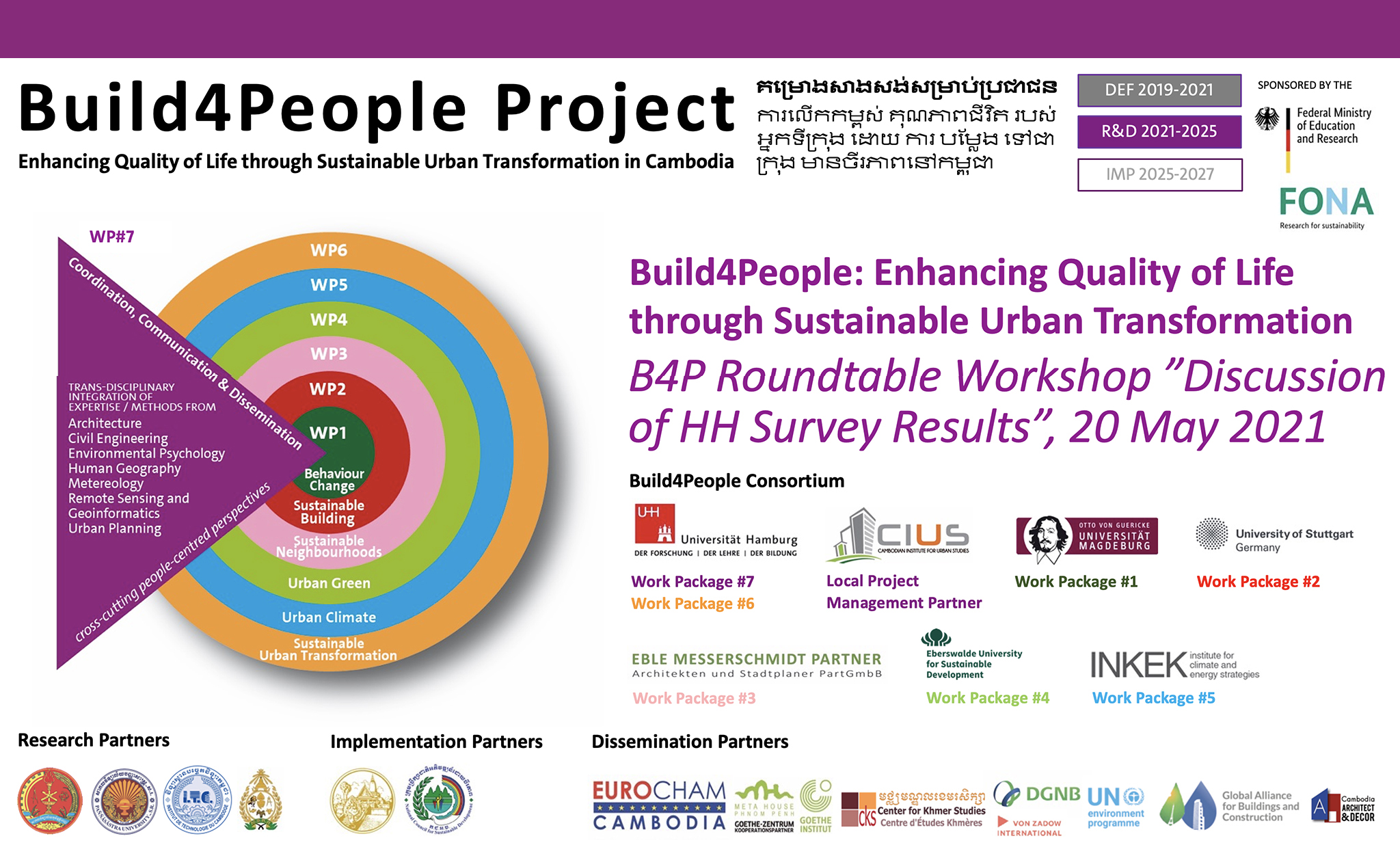 On 20 May 2021, about 25 members of the Build4People team from Germany and Cambodia discussed the preliminary results of a large-scale household survey among 500 households of the urban population of Phnom Penh in the context a Build4People Roundtable Workshop organized by Magdeburg University together with Hamburg University.

The rationale behind the survey was to learn more about the user perspective in the context of resource and energy consumption in buildings, the perception of thermal comfort and mechanical cooling habits, environmental awareness, (pro-environmental) behavior patterns and attitudes.

Each B4P Work Package had contributed questions to this multi-disciplinary joint survey under the lead of the environmental psychologists from Magdeburg University, responsible for Build4People Work Package #1 “Behavior Change” and with logistic support from Work Package #7 “Coordination, Communication & Dissemination”.

During the half-day workshop intense discussions took place together with the local research partners. For example, in regard of methodology, it was discussed how to avoid the “tendency to the middle” of questions with a Likert scale including 5 answering options. Another question raised was how to deal with the urban citizen’s preference to live in the traditional shophouse typology with commercial use of the ground-floor in the city-centre or in a borey row-house typology in the urban periphery, both with specific disadvantages in terms of urban sustainability. To support those wishes would be a people-led policy and enhance the individual quality of life of those people but it would also lead to a decrease of the overall urban sustainability and further decrease the urban quality of life of the urban marginalized who are not able to realize their housing needs due to financial constraints.

After the introduction of Dr. Michael Waibel about the aims of the workshop and the presentation of the agenda, Dr. Anke Blöbaum (WP#1) gave an input about the role of urban quality of life and on possibilities how to approach the measurement of it. She explained the different theories that lie behind the conceptualization of the questionnaire and gave an overview about how the questionnaire includes the different aspects of the theories.

After that, Annalena Becker (WP#1) presented the HH Survey methodology and general HH Survey results. She adressed the issues of survey development, the structure of the questionnaire, the fieldwork organization, the sample and socio-demographics, data preparation and data quality, and general insights like response patterns and possible explanations, and concluded with an outlook about a second fieldwork and the next major survey within the Research and Development phase.

During the discussion it was suggested to also look at the distribution of people living in the different building types throughout the overall population, which was well received. Further discussion was led about why it was difficult to reach people living in condo appartments and that next time they would like to try new strategies to take this into account. Special emphasis was also placed on the importance of taking high-rise buildings into account. Another query concerned the nationality of the interviewed sample. In order to only interrogate citizens of Cambodian nationality, the survey used a filter question that would only continue the questionnaire with people of Cambodian nationality.

Within the next phase of the workshop, each WP gave an overwiev of their work progress concerning the results of the survey.

During the discussion there was a question about the biggest empirical challenges of analysing which was answered with considering the answering scale, the language and the fact that it is a completely new context, as the theoretical models have been developed in rather western countries. It was emphasized that a cultural workshop would be very interesting. Another suggestion regarded the environmental perception and the possibility to show people sequences from the city and other surroundings.

Christina Karagianni addressed the present status and what would be the desired future conditions, gave input about the part of the questionnaire contributed by WP#2 “Sustainable Building”, the results of the survey and further analyses and requests for questionnaire input like the impact of family size, and that the next step could be to analyse the response patterns of certain groups accordingly.

As the topic about the tendency to the middle in response patterns came up again, during discussion there was the proposal to let people chose from three out of eight qualities e.g. about what would be the most important to them. In general, there was the idea to use a different scale where people could not choose the answer lying in the middle. Another idea during this discussion was to ask in a different way where the wishes and needs for their children/family/future generation would be considered. This might avoid the problem that people may not want to complain and therefore choose the middle answer.

Marcelo Rivera gave an insight of the survey content related to WP#3. He addressed questions of the questionnaire, insights into the results of the survey and further analyses and requests for questionnaire input like objective vs. subjective safety issues, privacy vs. social spaces or accepted time for walking/traveling to places.

During the discussion several points and questions came up. Concerning the safety issues, it was mentioned that safety is not always related to a gated compound as some studies show.

Another suggestion was to consider the urban expenses and to take into account that people often don´t have a choice of where to live because of the prices of properties in the city. Also, the fact that the sample and thereby the results are not representative of the general urban population of Phnom Penh needs to be considered.

Other points that were proposed to be considered were the connection of where people live and where they would like to live, as well as the satisfaction paradox that describes the dynamic of the individual perception and evaluation of external urban factors.

Jan-Peter Mund held the presentation for WP#4 and talked about their research questions and methods of action research. Again, the topic of the tendency to the middle concerning the answers and the hesitation of interpreting the results came up. It was proposed to rephrase the questions and to have each package working closely together with their local partners on the translation if the questions before jointly working on the questionnaire.

During the discussion it came up that citizens of Phnom Penh in Cambodia often like to go for a drive and visit places that are a little outside of town and that the question why people don’t use the urban green spaces at place could also be addressed in further research.

Lutz Katzschner presented the people centred perspective of the research of WP#5. He talked about problems concerning the combination of measurements of air temperature and indices, that in the future the questions on the citizens’ perspective will probably need to be more precise and therefore explained possible further steps.

As one of the topics was about dealing with picture-based questions, in the discussion it was mentioned that a solution might be to give a little more input (e.g. in the form of written content) about the scenery to give the people the feeling of being more in the picture rather than just looking at it.

For WP#6 Ravi Jayaweera presented their status quo, insights into the results of the household survey and interim conclusions of the results.

During the discussion there was a suggestion for further analysis in which it would be interesting to look at correlations between the people and if the “social norm” of the striving for living in a more energy efficient building is motivated by a more ecological or economic perspective.

In the following discussion of why so many interviewees are not at the extremes in their response behavior, it was noted that this probably is a cultural aspect. It was proposed, that the tendency of not wanting to fully agree or disagree may come from the fact that people do not only speak for themselves when asked about certain things in the questionnaire. Another proposal was to use different types of questions to get people’s opinions (e.g. multiple choice or ranking scales).

Last, Michael Waibel gave an insight into the connection of the results of the survey with coordination, communication and dissemination. He highlighted results of a comparison of household sizes and average power consumption per month in Cambodia compared to Vietnam. Results included that power consumption in Cambodia is higher, despite lower income levels. All in all, there is more research to be conducted concerning this topic.

During the discussion it became clear that similar results could also be found in different surveys and the question came up if it is because of the nature of the interview.
Another question concerned the generator use of the population in Cambodia and if this would be integrated as a relevant factor into the analysis.

The next unit of the workshop were break-out-sessions with in-depth discussions and lessons learnt, which were then shortly presented. During the break-out-sessions, the different groups could work at will with an interactive tool (“conceptboard”) that allows collaborative editing of an online white board.

1) What further analyses or adjustment of the WP specific survey content/method in further surveys could enrich your research questions?

What relevant aspects for Urban Quality of Life could you specify from your perspective that shall be measured within the main UQoL survey in the first year of the R&D phase?

Session 1 mainly discussed on further analysis and methods. Topics like what scales to use depending on the focus of the analysis and questions about adding more observations and/or qualitative analysis came up. More questions concerned collecting more data in other areas or the need to have more discussion with the municipality and companies to get to know their perspective.

Another question concerned the problem of how to deal with the tendency to the middle and how to interpret the findings. Possible solutions that were proposed concerned focusing on the “strongly agree” answers or analysing the relations of all answers. That would be to look at where primarily the responsibility is seen through all the actors and to recalibrate the answer pattern by this.

1) What are the three main results from your WPs perspective and what interdisciplinary links can you build?

2) What further analyses or adjustment of the WP specific survey content/method in further surveys could enrich your research questions?

3) What relevant aspects for Urban Quality of Life could you specify from your perspective that shall be measured within the main UQoL survey in the first year of the R&D phase?

One point of the discussion after the presentation concerned the shifting preferency of housing types and the similarity of the development of the building sector compared to Vietnam. It was mentioned to not only consider the status quo about what people prefer at the moment, but also what alternatives people might prefere in the future. To see that there are alternitive housing types that could be more sufficient in ecological aspects.

Another point of discussion was the people centered perspective and the understanding of both the people and the government. Arguments were that focusing on the people centered perspective does not mean one cannot have sustainable aspects in mind. A holistic understanding of the systems’ elements and issues is important to provide solutions and proposals in the future. Another concern was expressed about the survey questions itself and if the local people really understand how to answer. It was proposed to further discuss this aspect and work in small groups to specify the questions.

Another point of discussion involved getting people to become interested in different types of housing by asking about associations and additional qualities these buildings have.

1) What are the three main results from your WPs perspective and what interdisciplinary links can you build?

Finally, the organizing work packages WP#7 and WP#1 thanked all participants for their commitment and referred to the next workshop where everything around the topic of publication can be discussed.